Hark, the Herald Angels
are Driving Me Crazy

Since when did “The Twelve Days of Christmas”
turn into four months? 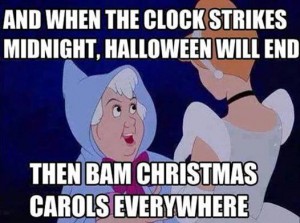 Not only are they driving me crazy, they’re following me everywhere I go. Starbucks, the supermarket, malls—even wedged between Elvis and the Beatles on my favorite Golden Oldies station!

And this has been happening since September, October or November, depending on which country you’re in.

Since when did The Twelve Days of Christmas turn into four months?

Yet you’ll happily listen to your favorite music—whether Rolling Stones, Adele, Beethoven or Louis Armstrong—over and over again.

Who mandated that the same limited bunch of Christmas carols be repeated ad infinitum? So that by the time those merry, strolling carolers strum their way past your door on Christmas eve you’re ready to strangle them?

Here’s the best answer I can come up with.

Some years ago I was waiting for a flight in an airline lounge early one Christmas morning. I was the only passenger there.

Of course, there was background music—you guessed it, Christmas carols!

So I asked them to change the CD.

“But it’s Christmas!” the lady replied.

“I KNOW it’s Christmas,” I responded, almost losing my cool. “How could I NOT know?”

Why this lady believed Christmas can’t be Christmas without months of advance notice beats me. But it seems to be a widely held belief, powerful enough to persuade businesses like my Golden Oldies station to give its customers what they “need” instead of what they want.

Wonder why no one’s ever started one?

Carols or not, I trust you have a merry Christmas—and I wish you a happy, carol-free new year.

What can you do?

Quite a few things:

Bitch: complain to the staff. They probably agree with you, so . . .

Commiserate: “How can you stand hearing those same songs day after day?” You’ll probably find they’re bored to death, even more so than you!

Boycott: tell them—preferably the manager or even better, the owner—you’ll be back next year, or when they stop playing carols wall-to-wall, whichever comes first.

Grab a Competitive Advantage: Have your own business? Make it a “carol-free” zone.

And, of course, pass this article along to your like-minded friends