As teenagers, Alison and Derek were lovers—but chose opposite directions which tore them apart.

Now adults, the pursuit of their incompatible dreams turns them into enemies who must deny their love for each other.

But the real-world consequences of their actions bring them together in an alliance of mutual self-preservation—and cause them both to question their every belief . . .

Trust Your Enemies is a novel of ideas that’s packed with action and adventure. It’s a political thriller—but one like no other you’ve ever read.

Alison McGuire is the indispensable “right-hand” to Australia’s next Prime Minister. She’s one step away from achieving the goal of a lifetime . . . when she’s suddenly ensnared in a web of power and intrigue by Frank McKurn, a devious, Machiavellian politician.

In her frantic race for survival, Alison must deliver a knockout blow to demolish McKurn . . . before it’s too late.  But how? . . .

To win, they must risk everything

In desperation, Alison turns for help to the key people in her life: An acerbic-tongued newspaper columnist—who ends up in a coma. A secretive computer hacker who discovers incriminating evidence—and then is forced into hiding. A police officer who’s abruptly removed from a crucial investigation. A politician supposedly on her side—who shows his true, spineless colors at the worst possible moment.

With her every resource exhausted, she faces a life-or-death question: Can she trust Derek Olsson—the man she once loved? The man she mistakenly thinks deceived and betrayed her, who she now regards as an enemy?

Meanwhile, Olsson is nowhere to be found. He’s on the run, wanted by the police for a murder he claims he didn’t commit. A drug-dealing Triad king has offered a reward for his head. And a powerful politician must shut Olsson’s mouth—or risk spending the rest of his life in prison.

A battle of liberty against power

Only by joining forces can Alison and Olsson both survive. The irony is that they don’t yet know it. Alison must first overcome her anger and bury the hatchet—and time is running out.

A shadowy contract hit man is pursuing them both. Known only as “The Assassin,” he has never failed.

But Trust Your Enemies is far more than a page-turning action novel.

You’ll be plunged into the seamy underbelly of partisan politics, a world where no one is a friend and—paradoxically—the only people you can really trust may be your enemies.

Woven through the novel are challenging and controversial themes, ranging from the psychological motives behind power and corruption to the eternal human desire for freedom and individualism. The key characters learn, dramatically, that when you make the wrong choices, you get the opposite of what you set out to achieve—and then take you on an inspiring journey of moral redemption and personal liberation that will have you cheering when you reach THE END. 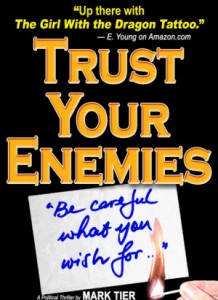 “Whoa! Epic storyline comes together brilliantly. Great set of characters whose trials will have you thinking.”

“Mark Tier has a writing style as fluid as John Grisham’s or John le Carré.”

“Up there with The Girl With the Dragon Tattoo. Powerful, intense, very well written.”

To sample Trust Your Enemies: