A Real-Time “Experiment” in
Private versus Government Police 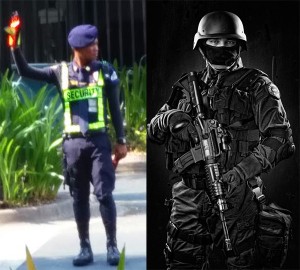 Which one would you choose?

Pretty much everywhere you go in the Philippines you see uniformed men and women wearing holsters with six-shooters, often carrying a shotgun or a rifle as well.

Even the first-time American visitor is quite surprised by the number of guns he sees. Visitors from other countries are usually shocked.

The overwhelming majority of these armed guards are not police but privately-employed security guards. You see them at the entrances of malls [with metal detectors], shops, hotels, office and apartment buildings, and at the gates and entrances of the walled villages and privately-owned office complexes that dot the cities of Manila, Cebu, and other major Philippine towns.

To enter one of these villages you must be a resident, or a guest or an employee of a resident. Everyone else is turned away at the gates. Including the police, unless they have evidence of a major crime!

These are the areas where the rich and famous live, work, and play. With an average per capita income a mere 4.9% of the United States’, the overwhelming majority of Filipinos are poor, by Filipino standards. Tens of millions of families live on US$150-odd a month—or way less. Crime may be no more prevalent in the Philippines than anywhere else. But with a population of 98 million, with perhaps 10 to 15 million who are rich or middle class, there are simply a lot more criminals per wealthy person.

There are several significant differences between the private and “public” (i.e., government) police.

The focus of the private security guards is prevention; the primary focus of the public police is cure: they usually react only after a crime has been committed.

This is universally the case.

For example, when I was about nineteen I moved to Sydney where, initially, I stayed with some friends. One Saturday afternoon we returned to find that the house had been burgled. What was intriguing was what had been stolen: bedding, kitchen gadgets, a few valuables that had been lying around, and other odds and ends including my brand new suit! Valuables like jewels and cash that weren’t obvious were still there.

When the police arrived their conclusion was: “Some kids furnishing their house.”

Would they be caught?

The policemen shrugged. “Happens all the time.”

It was quite obvious there was nothing they could do; nothing they were going to do. Other than fill out a report we could submit to the insurance company.

Prevention, in such an environment, is a private matter. My friends’ house was quickly equipped with alarms, bars on all the windows, and triple-locked dead-bolted doors.

That was mumbledy-mumble years ago—and my friends’ house hasn’t been burgled since.

Prevention is better than cure.

Secondly, the Philippines’ private security guards, or at least most of them, behave very differently from the police. This difference is best understood by considering what happens when you live in one of these many walled villages.

Say you parked your car in the wrong place. One of the guards will come by and say, “Excuse me, sir [or, sometimes, “boss”: after all, ultimately you, as a resident, are their employer], could you move your car, please?”

Compare this to what happens if you park in a no-parking zone in a “public” street. You return to find the cops have stuck a ticket under the wiper, or worse, towed your car away. Don’t expect “service with a smile” from them!

Once, in a privately-owned office development, a friend of mine went through a red light and then made a prohibited U-turn. He was stopped by one of the security guards who told him what he’d done and then said: “Please don’t do it again.”

Drive along a “public,” government-owned street and do something like that and your experience will be vastly different.

Ultimately, the private police are there to serve you, their employers. You know them and they know you; they’re your friends. You’re greeted with a smile.

The stated mission of the “public” police may be to “serve and protect.”

But these days, more often than not, police in most places seem to work on the principle that you are guilty till proven innocent. Or they’re revenue collectors, out to meet their daily quota of tickets. When they stop you, a common reaction is fear.

Of course, not all private security guards are nice guys. In one of Manila’s villages, a homeless man managed to climb over the 8-foot high fence and kip in an empty house. The guards found him and beat him to death.

Shortly afterwards, at a meeting of the village association, the security company employing those guards was summarily fired, to be replaced by a competing firm.

Try that with your local SWAT team—you know, the one that just smashed their way in the wrong house and murdered a couple of totally innocent people, not to mention their dog, by “mistake.”

When He Who Pays the Piper Doesn’t Call the Tune

In theory, your local police are working for you: Where do their salaries come from? Your taxes.

But when government is involved, he who pays the piper doesn’t call the tune. Yes, government employees can be fired (often with difficulty)—but not by you. Unless, in a democracy, you gather the support of a majority of your fellow voters. And maybe not even then.

Your only real option is “secession”: move to another town or city.

Years ago, a friend of mine lived and had his business in a small town in Connecticut, where he was harassed by the local police chief. It started when he and his wife were driving along Main Street; he was stopped, ordered to get out of his car and lean against it, hands on the car’s roof, searched—with no explanation, certainly no warrant, and the mere comment that he was “a suspicious character.”

This, as you can imagine, annoyed him no end. He told his landlord he was going to move out.

The landlord didn’t want to lose a tenant who paid on time, every time. So he told my friend: “Let me talk to the police chief.”

As the town’s biggest property owner, his landlord was a big wheel in this town. And a large contributor the Policemen’s Ball and similar “charities.”

The very next day, the landlord said to my friend: “How about if the police chief apologizes to you?”

That, he thought, could be acceptable.

But his wife disagreed. “I don’t feel safe here any more.”

Fact is, if you have no clout, it’s difficult if not impossible to fight city hall—and win.

Wouldn’t that be nice?

You can—if you’ve contracted with the crime-prevention company which employs the bastard in question.

Because you’re a customer.

Wherever you go, customers always get better service than voters.