Introduction to Give Me Liberty 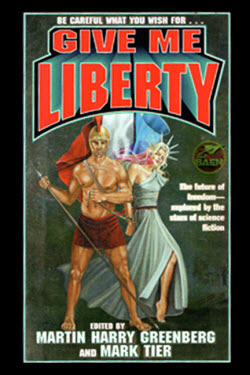 Read the review in

Give Me Liberty is a collection of classic science fiction stories I co-edited with Martin H. Greenberg. It was published by Baen Books in January 2003

When Patrick Henry spoke his immortal words, “Give me liberty or give me death,” on the eve of the American revolution, the last thing he expected was for the British to give him liberty. Indeed, in the history of mankind, you could count the number of benevolent rulers who have given people their liberty on the fingers of one hand—and still have plenty of fingers left over.

History shows there’s only one way you can be sure of gaining your liberty: take it.

Which is exactly what Patrick Henry proposed to do. His stirring 1775 speech concluded:

Is life so dear, or peace so sweet, as to be purchased at the price of chains and slavery? Forbid it, Almighty God! I know not what course others may take; but as for me, give me liberty or give me death!

This is a collection of stories about people who, like Patrick Henry, take their liberty.

Just as liberty is a powerful urge in the human heart, so liberty is a recurring theme in science fiction. Yet the majority of the stories in this book are unique even within the imaginative realm of science fiction. They propose taking the ultimate in liberty: doing away with government entirely.

They show the ultimate truth of the saying that Thomas Jefferson made part of our history: “Eternal vigilance is the price of liberty.”

When Jefferson used the phrase at the signing of the American Declaration of Independence was he talking about the British? Absolutely not. He was naming the American government a far greater danger to the liberties of Americans than the British (or much later, Soviets) could ever be, a sentiment widely shared by the American revolutionaries.

Jefferson’s declaration was co-opted and corrupted by cold war politicians. Eternal vigilance, they told us, was required to protect our liberties from external enemies like the Soviet Union. In the name of freedom they erected the powerful welfare-warfare state that continues to invade our liberties to this day.

Stories like Lloyd Biggle’s “Monument” and Frank Herbert’s “Committee of the Whole” demonstrate the ultimate truth of Jefferson’s statement: that eternal vigilance against our own government—not external enemies—is the price of liberty. A lesson that has, to our detriment, been forgotten.

I first read most of these stories as a teenager, beginning with A.E. van Vogt’s “The Weapons Shops.” I can still recall the excitement that gripped me then—what teenager could resist the idea of a gun that would fire only in self-defense? Sold by shops that government officials (and criminals) simply couldn’t enter?

You might argue that such a teenage fantasy should remain where it belongs—as a teenage memory. I can only respond that yes, when I first read it, the idea of liberty that gripped me then through van Vogt’s story was merely an abstract ideal. As an adult, my teenage ideal has taken on whole flesh, so to speak. This, of course, is not the place for a discourse on liberty (or anything else). All I can say is that, as an adult, I can think of numerous times when van Vogt’s gun would have come in real handy. And when I see the injustice and oppression around the world, if van Vogt’s weapons shops were to suddenly appear as they did in his story, I’d say the demand for his guns would far outstrip even his wild imaginings.

Ah, but you might respond, if there’s no government wouldn’t society collapse into barbarism?

I suggest you read Eric Frank Russell’s classic “And Then There Were None”—my favorite story in a book full of favorites. If you’ve never read this story before (and quite likely you haven’t as it’s been out of print for far too long) I envy you. I’ve re-read this story many times, but there’s no time like the first time.

The possibilities that Russell offers in just a few thousand words is mind-boggling.

Then there’s Vernor Vinge’s neglected gem, “The Ungoverned.” As the “Republic” of New Mexico invades the peaceful anarchy of Kansas where can your heart lie but with the truly free people—the ungoverned?

Do you sometimes think that bureaucrats should be strangled with their own red tape? Then you’ll love Russell’s “And Then There Were None.” Do you feel like dancing with joy when a ruthless dictatorship collapses? Then kick up your heels with Murray Leinster in “Historical Note.” And shouldn’t petty tyrants get their just deserts? They have no choice but to surrender in “Gadget vs. Trend” by Christopher Anvil—and are delightfully defenseless in van Vogt’s “The Weapons Shops.”

I feel sure you can’t fail to be inspired by these wonderful stories about the ultimate freedom. Whether I’m right about that, I know you’re in for a lot of fun in the following pages.

BEST DEAL!  Give Me Liberty PLUS Visions of Liberty in one volume: Freedom!