It’s about 8:30pm. I’ve checked in for my 10:20 flight from Sydney to Hong Kong and I go looking for a cappuccino.

The first place I stop the guy behind the counter says: “I’m off duty”—even though he’s standing there doing something. Good attitude, huh? Certainly makes me want to come back. After walking past several coffee shops that are closed, I find one that’s not. Except it is: “I’m closed,” the guy says. “Try the next one.”

By this point, I’m fed up with people’s “I-don’t-give-a-shit” attitude. If they’d said: “Sorry, we’re closing up,” or something like that, well, okay. But the undertone was more like: Oh, Christ! Not another customer.

At last I find what’s probably the only coffee shop in Sydney airport that’s still open. And guess what: there’s a line of eager (desperate?) customers!

That was a sour note to an otherwise enjoyable trip to Australia. Just the same, it was a relief to arrive in Hong Kong, even it was 5am.

Starbucks was open. (The downside: it sits in the spot that use to belong to the local Pacific Coffee chain, which I prefer. Oh well, you can’t have everything it seems. Not even in Hong Kong.)

Around the world, newspapers are cutting back, merging, closing—even dropping their print editions entirely.

Except in Hong Kong, where there now more newspapers today than there were ten years ago.

The growth mostly comes from free dailies. There are five of them. One, The Standard, is in English; the other four are Chinese. These are handed out at MTR (subway/underground) stations—as you can see from this picture. 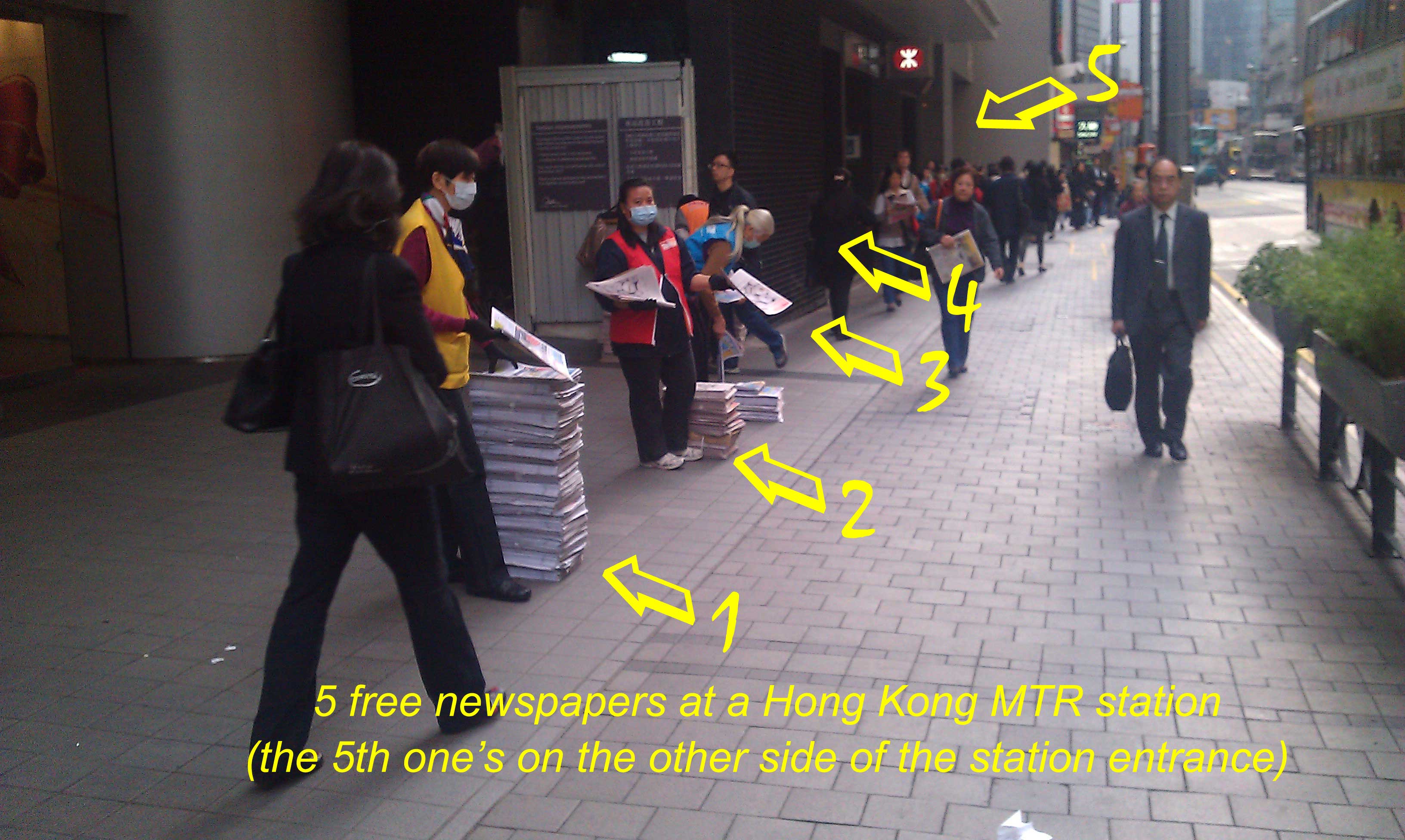 On top of the freebies, there are fourteen paid dailies (one English and thirteen Chinese—three of those being financial papers!) and four international dailies (Wall Street Journal, International Herald Tribune, Financial Times and the China Daily). Nineteen daily papers (23 if you count the international ones) in a city with a population of 6 million. That’s got to be some kind of (probably all-time) record.

The freebies are thin, but packed with ads and, apparently, well-read.

Or, at least, well-circulated. 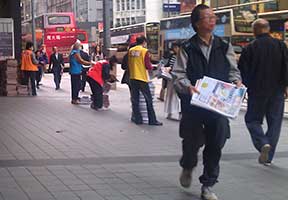 As you can see from this picture—taken near the Sheung Wan MTR station—a stream of elderly people walk past and pick up copies of all five freebies. Perhaps, being retired, they have nothing else to do, and/or can’t afford to buy something to read.

But no. When they get to the end of the freebie line they stuff their booty into a shoulder bag—and then go to the next MTR station where they repeat the performance (thanks to my associate Ivy who brought this to my attention).

What’s more, they seem to far outnumber those who (like myself) select one or perhaps two of the free papers to actually read.

They’re supplementing their income by gathering free newsprint to sell to a recycling station.

Despite this wasted circulation (a tax-free welfare program?), those five freebies must still be making money. Otherwise they’d go off the streets.

Must have something to do with low taxes. 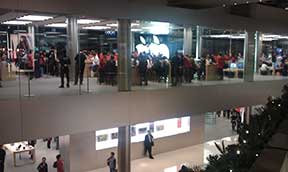 No—there’s nothing special about the day I took this photo. That’s how the store looks pretty much every day of the week.

When the corridors outside are packed as well, then it’s a special day—like when a new iPad or iPhone goes on sale.

A few months before I took this pix I bought a MacBook Air. Again, just another ordinarily busy business day for Apple.

But so many other customers made the same purchase, I had to wait some fifteen minutes before one of the six “setup geniuses” was free to help me activate my new toy.

The trade comes mainly from visitors to Hong Kong. Especially from China. One reason: Hong Kong is probably the cheapest place in the world to buy a computer. For example, the basic iPad costs about US$502 in Hong Kong. Okay, that’s $3 more than the $499 you’d pay in the US.

Except that $499 price is before tax. Hong Kong has no sales taxes.

I wouldn’t be surprised if Hong Kong’s Mac store has the highest gross per square foot of all Apple stores.

Author of the bestelling The Winning Investment Habits of Warren Buffett & George Soros, Mark Tier was the founder of the investment newsletter World Money Analyst, which he published until 1991, the author of Understanding Inflation and The Nature of Market Cycles. Since 1991, he's helped start five new (and highly successful) investment publications. When he adopted the the winning investment habits of Warren Buffett & George Soros himself, he sold all his business interests and now lives solely from the returns on his investments. His most recent books including Trust Your Enemies, a political thriller which is “Up there with The Girl With the Dragon Tattoo” and “Worthy of Ayn Rand” according to reviews on Amazon.com, and Ayn Rand's 5 Surprisingly Simple Rules for Judging Political Candidates.
Paranormal and Mystical Experiences: Real or Imagined?If Ron Paul were President…

One thought on “Amazing Hong Kong”