The Australian Competition and Consumer Commission’s (ACCC) proposal that Google should pay Australia’s news media for the “privilege” of including news headlines in their search results is based on several false premises.

Australia’s newspaper publishers are claiming that Google is using their content without their permission, and in possible violation of copyright laws.

So why haven’t the media companies withdrawn their permission? Why haven’t they sued Google for breach of copyright?

If they have a bullet-proof legal case, they would definitely win. The fact that they have taken no such action implies that they don’t.

A conclusion that appears to be confirmed by the information sheet “Fair Dealing: What Can I Use Without Permission?” published by the Australian Copyright Council.

The fair dealing exceptions to copyright infringement
There is no general exception for using copyright material simply because you think it is fair or because you are not making a profit.
The Copyright Act allows copyright material to be used without permission only if your use is a fair dealing for one of the following purposes:
• research or study
• criticism or review
• parody or satire
• reporting news
• enabling a person with a disability to access the material
• professional advice by a lawyer, patent attorney or trade mark attorney 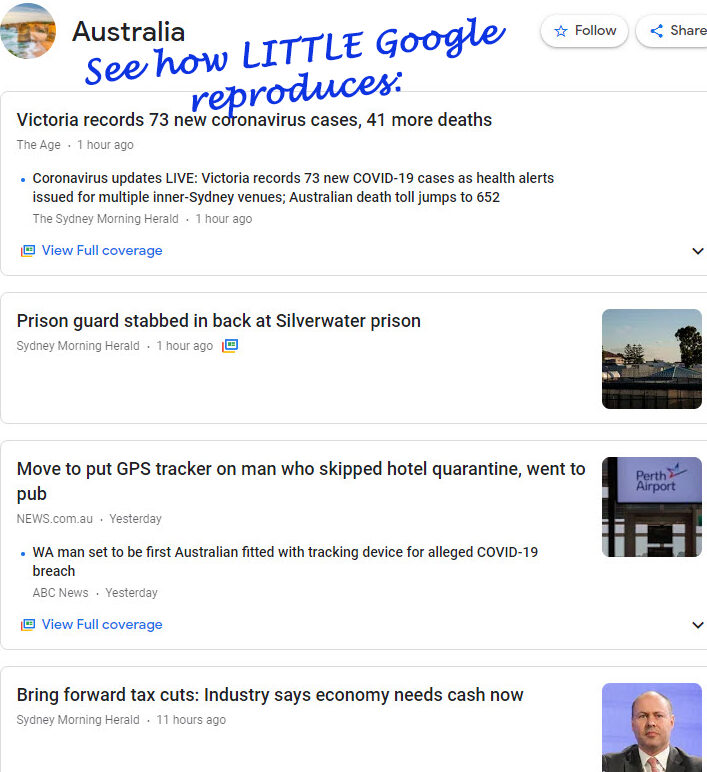 Headlines, and not much more (would YOU pay for that?)

The media’s complaint is that the press is a crucial “public service,” which by “curating” the news stories they publish the news that Australians need (but don’t always want), and counter the “false facts” that are supposedly prevalent on social media and similar websites.

The truth is somewhat different. Demonstrated by the careers of all successful newspaper moguls, including America’s William Randolph Hearst and Joseph Pulitzer, the UK’s Alfred Harmsworth (Viscount Northcliffe) and Max Aitken (Baron Beaverbrook), and Australia’s own Rupert Murdoch.

“Yellow Journalism”: a Race to the Bottom

In the 1890s, Pulitzer’s New York World and Hearst’s New York Journal created mass circulation newspapers by fighting “a battle to the bottom,” developing the techniques of yellow journalism in the process.

In the United Kingdom after the First World War, Northcliffe’s Daily Mail and Daily Mirror and Beaverbrook’s Daily Express followed a similar circulation “battle to the bottom.” After all, that’s where the numbers are.

Without question, Rupert Murdoch is the world’s most successful press baron, surpassing other luminaries past and present by a wide margin.

His successful career illustrates the nature of the newspaper business.

The Economist described Murdoch as “inventing the modern tabloid,” starting with Sydney’s Daily Mirror in 1960.

In 1968 he acquired Britain’s populist, down-market paper, News of the World. The following year he turned the struggling daily The Sun into a tabloid. By taking it down-market with sensational headlines and topless models on page 3 of every issue—reportedly instructing the editor: “I want a tear-away paper with lots of tits in it”—Murdoch soon built it into Britain’s highest-circulation paper with 10 million plus daily readers.

When he entered the US market his first major success was the Star, a copycat of the high-circulation but hardly-reputable National Enquirer.

By contrast, when he launched Australia’s first national daily newspaper, The Australian, in 1964, it was positioned to be Australia’s equivalent of The Times and The New York Times. Upmarket, at the opposite end of the spectrum from his high-circulation tabloids.

Which illustrates the key to success in the newspaper business (except in a one-newspaper town): select your niche.

The niche of The Australian Financial Review, The Financial Times, and The Wall Street Journal, is obvious.

The niche of other newspapers is not always so clear. But if your target market is primarily made up of Labor voters, your newspaper will mostly support the Labor Party. While your more upmarket papers will probably support the Liberals.

Newspapers generally reflect the biases and beliefs of their readers: it’s the rare person who’ll pay for anything that challenges his or her beliefs and prejudices.

The Australian is an excellent example of this positioning.

Its niche being upmarket means it generally supports the Liberal-National Coalition. Most of its political reporters are Liberal supporters, and have even worked in Parliament House for Liberal/National parliamentarians.

To appear even-handed, there’s a token appearance by the other side, primarily in the form of former Labor minister, Graham Richardson.

Which is not to say that The Australian doesn’t report fairly on Labor achievements. But its overall bias is obvious to any reader.

As to protecting the innocent average Aussie from so-called “false facts,” consider the media’s reaction to Scott Morrison’s federal election win in May 2019.

Morrison called it “a miracle.”

Even The Guardian ran a story titled: “Scott Morrison won the unwinnable election.” (If it was unwinnable, how come he won?)

The truth is quite different.

Morrison’s mere 2-seat majority (hardly a miracle!) was achieved by savvy campaigning targeting marginal electorates. As shown by The Australian’s own Nikki Sava in her book, Plots and Prayers.

Fact is, Morrison’s win was totally unexpected. All the polls forecast a Labor win—and the media was bowled over by Labor’s loss.

When two Queensland workers (normally Labor supporters) refused to shake Bill Shorten’s hand, it seemed obvious to me that there was something amiss with the polls. Surprisingly, no journalists got the hint.

Hardly an example of the media reporting the Truth and countering “false facts”!

True, the newspaper industry is in decline worldwide and many journalists have lost their jobs as consumers prefer Facebook, Instagram, and many other websites to reading newspapers.

The simple fact is that younger people read nothing to not much at all that’s in print.

Of my four children, aged 22 to 37, two are medium (but far from avid) readers of books. But the two younger ones will only read a book for school, university, or work.

That is: when they’re FORCED to.

They and their generation spend far more time on their smartphones watching videos than they do reading anything.

Newspapers’ Customer Base is Dying. Literally

Reading newspapers is an acquired habit. A habit that the young are simply not acquiring.

I started reading papers when my father brought home the Daily Mirror each evening. Today, I receive the print edition of The Australian every morning. Starting the day with a newspaper is part of my morning ritual. A habit I acquired 50+ years ago. A habit like smoking—though easier to give up.

Fact is: habitual newspaper readers are dying off. Literally. In one nearby coffee shop I frequent, where you rarely see a grey hair, there’ll often be a pile of yesterday’s newspapers “untouched by human hands.” While at another one there’s always competition to get a paper to accompany your morning coffee: I’m competing with other grey-hairs, and often have to wait.

The print publishing business, not just newspapers, is in decline.

Computers plus the internet have revolutionized thousands of industries, not just print. Email has decimated post offices’ first class and airmail revenues; Skype and clones have replaced $1+ a minute international calls, and when was the last time you sent a telegram? (email is quicker).

Back when I was at school in the early ’60s, my best friend’s Dad (a widower) cancelled his subscription to The Canberra Times—but quickly found he couldn’t do without it.

He missed the news?

He discovered there was far more important information in The Canberra Times that he simply had to have. Supermarket specials; ads for department store sales; radio and TV programs; not to mention what was on at the movies.

Seems more logical to me that the newspapers’ lost ad revenue from Woolworths, Coles, and similar advertisers, who now make their offers direct to customers by email, have more to do with the media’s financial decline than Google.

To persecute the real “culprit,” it might be more appropriate to sue Tim Berners-Lee for damages. After all, he invented the internet, not Google.

Why single out Google?

Which drives traffic to other websites for free! Including to media sites where more often than not you’ll hit a paywall.

One result: The Australian is crowing about “its highest ever overall monthly audience of 6.23 million, surging an extraordinary 69.7 per cent over the year.” No doubt half if not more of those readers have come courtesy of Google.

And a point the ACCC seems to be missing entirely: Google (and Facebook, for that matter) don’t reproduce the media’s reporting. They merely use the headline plus a paragraph (or less).

Want to read the story? Click on the link!!

If anyone should pay anyone, the media should be paying Google, not the other way around.

Consumers Have “Voted” With Their Eyeballs

The world’s consumers have had their say. They have “voted” with their feet (or rather, eyeballs), and thumbed their noses at the newspaper industry.

The average consumers’ primary interest is not reading about the latest shenanigans in Canberra or Washington, but being informed about what events, deals, the best pizzas, kebabs, cakes, other yummies and the like that are on offer in their immediate neighborhood. What celebrities are up to, the latest gadgets, or the latest local weather forecast—information that’s rarely printed in a daily newspaper but is readily and instantly available by searching Google or going to Facebook.

It’s ironic that the Australian Competition and Consumer Commission is planning to protect the News-Fairfax (now Nine) duopoly from competition!

By taking this stand, it logically follows that the ACCC should be renamed the Australian Anti-Competition and Anti-Consumer Commission. 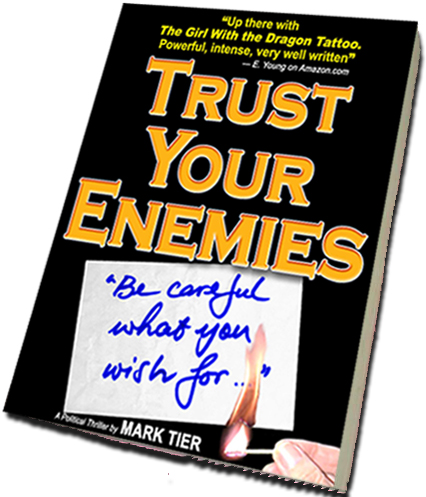 As teenagers, Alison and Derek were lovers—but chose opposite directions which tore them apart.

Now adults, the pursuit of their incompatible dreams turns them into enemies who must deny their love for each other. But the real-world consequences of their actions bring them together in an alliance of mutual self-preservation—and cause them both to question their every belief.

Author of the bestelling The Winning Investment Habits of Warren Buffett & George Soros, Mark Tier was the founder of the investment newsletter World Money Analyst, which he published until 1991, the author of Understanding Inflation and The Nature of Market Cycles. Since 1991, he's helped start five new (and highly successful) investment publications. When he adopted the the winning investment habits of Warren Buffett & George Soros himself, he sold all his business interests and now lives solely from the returns on his investments. His most recent books including Trust Your Enemies, a political thriller which is “Up there with The Girl With the Dragon Tattoo” and “Worthy of Ayn Rand” according to reviews on Amazon.com, and Ayn Rand's 5 Surprisingly Simple Rules for Judging Political Candidates.
PrevHow to Keep Your Cool During a Market Panic