Fire in the Brain is an eye-opening study of how our own brains can misinterpret the data of the senses, leading us to believe we’ve seen or experienced things that simply ain’t so. 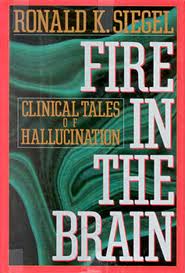 The author, Ronald Siegel, was an associate professor at the UCLA School of Medicine when he wrote this book (1992). He begins with an investigation of hallucinations caused by drugs from marijuana to mescaline. With student volunteers he calls “psychonauts,” Siegel studies hallucinations under controlled conditions, showing how the brain structures them from a handful of similar units, mostly simple geometric shapes. He finds that even the tunnel with the light at the end reported in “near death” experiences are similar mental constructs, which can also be caused by factors such as severe stress or oxygen deprivation.

And reproduced in laboratory conditions.

The remaining two-thirds of his book are case studies of people who came to him for help. With the expertise of a Sherlock Holmes, Siegel shows how the brain—not some mystical other world—is the cause of a wide range of different so-called psychic phenomena. A few examples: the succubus (waking up “knowing” that some intruder is sitting on you and you’re about to die), channelling, escaping pain during torture by “leaving” your body, and invisible playmates.

Perhaps the most fascinating of these are his investigations of how an otherwise sober-minded man was convinced he’d seen a UFO and been abducted by aliens, a nurse who saw swastikas on her patients, a man who, now and then, was haunted by a black hole which was about to swallow him, and a piano teacher who had to quit because she couldn’t turn off the music in her own head. In each of these cases, Siegel manages to eliminate these phenomena in his clients’ minds by persuading them to change the behaviors or avoid the stimuli that caused them.

All in all, a powerful scientific antidote to beliefs in a wide range of so-called “psychic” phenomena. Required reading for anyone who wants to get to the Truth—or persuade others of the fallacies of their mystical or “paranormal” beliefs.