Although Ayn Rand died in 1982, several factors make it easy for us to have a good idea of what she might say today—at least on some political issues.

For example, at the Ford Hall Forum in 1976 she made her opinion of Ronald Reagan crystal clear: 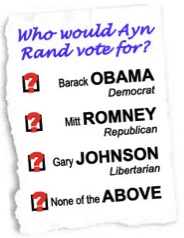 “That so-and-so, claiming to be a defender of capitalism and Americanism, has come out against abortion.

“If he doesn’t respect so fundamental a right, he cannot be a defender of any kind of rights.” [ARA, 17]

As governor of California, Ronald Reagan supported the right to abortion—and later changed his tune.

As governor of Massachusetts, Mitt Romney supported the right to abortion—and later changed his tune.

So we can confidently conclude Rand would have the same “That so-and-so” opinion of Mitt Romney.

This is just one of several of her statements we can adapt to current issues where the concrete referents are sufficiently similar.

What about Barack Obama?

Rand would probably classify him with Jimmy Carter as an unprincipled power luster who’s “been on both sides of every key issue.” [ARA, 70] And she would, of course, skewer “Obamacare,” perhaps along the lines of her 1972 analysis of George McGovern who was:

determined to make economic security a matter of right [which] can and does mean only one thing: a promise to enslave the men who produce, for the benefit of those who don’t. . . . There can be no such thing as the right to enslave, i.e., the right to destroy rights. [ARL, 31Jul72]

Substituting “health care” (in bold) for “economic security,” she might say Obama is:

determined to make health care  a matter of right [which] can and does mean only one thing: a promise to enslave the men who produce health care, for the benefit of those who don’t. . . . There can be no such thing as the right to enslave, i.e., the right to destroy rights.

(Just for the record, those identical words can be applied to “Romneycare.”)

How about Gary Johnson, the Libertarian Party candidate? Perhaps—

which was one of her many acid comments about libertarians in general.

Ordinarily, we could imagine Rand applying the same Reagan “That so-and-so” statement to Ryan.

However, in 2005 Ryan spoke at a commemoration of Ayn Rand’s 100th birthday, where he said:

I grew up reading Ayn Rand and it taught me quite a bit about who I am and what my value systems are and what my beliefs are. It’s inspired me so much that it’s required reading in my office for all my interns and my staff . . . the reason I got involved in public service, by and large, if I had to credit one thinker, one person, it would be Ayn Rand. And the fight we are in here, make no mistake about it, is a fight of individualism versus collectivism. [Emphasis added.]

So what’s the first thing Ryan says after Romney chose him as Veep? A National Review interview reports:

“You know you’ve arrived in politics when you have an urban legend about you, and this one is mine,” chuckles Representative Paul Ryan, the Budget Committee chairman, as we discuss his purported obsession with author and philosopher Ayn Rand… These Rand-related slams, Ryan says, are inaccurate and part of an effort on the left to paint him as a cold-hearted Objectivist… “…give me Thomas Aquinas… Don’t give me Ayn Rand…”

Rand would never vote for someone who posed as a supporter of her ideas and then, like Judas, turned against her as a matter of political expediency, rejecting reason (Rand) in favor of faith (Aquinas) to boot.

It’s easy to imagine an issue of The Ayn Rand Letter shredding Ryan with a tone of vituperation exceeding anything she said about George McGovern.

The Lesser of Two Evils?

Clearly, Rand would vote for neither of the major candidates.

But on many occasions she did cast her ballot for one candidate in order to vote against another. One such example was the 1972 Nixon-McGovern race.

Saying “if there were some campaign organization called ‘Anti-Nixonites for Nixon,’ it would name my position,” [ARL, 28Aug72] she urged every voter . . .

Many Objectivists are taking a similar position today, claiming it’s essential to throw Obama out; many are even encouraged by Ryan’s charisma and Rand’s supposed influence on him to urge voting for the Republican ticket.

Like Reagan, Romney, and Ryan, Buckley was a religious conservative; she went so far as to comment: “I would vote for a liberal over Buckley any time.” [ARA, 68]

Does this imply that she’d vote against the Republican’s religious conservative duo?

The most apt comparison with today is 1980: Reagan and Carter. Like Romney/Obama, a religious conservative versus a welfare statist.

Though Obama is a worse welfare statist than Carter, Romney (not to mention Ryan) is a more committed mystic than Reagan ever was.

Once asked if she would support Carter against Reagan, based on Reagan’s anti-abortion stance, she replied:

No, I would not vote. You should vote only so long as you think a candidate has more virtues than flaws. But if you regard both candidates as evil, do not choose a lesser evil. Simply don’t vote. [ARA, 69]

But she’d go much further.

She’d be horrified at the overall state of American politics today.

The intrusion of religion into politics.

Rand called religion “the greatest disease of mankind,” [JAR, 73] saying it’s “a private matter” which “should not be made a part of political movements.” [LAR, 567] Furthermore,

The greatest single threat to capitalism today is the attempt to put capitalism, mysticism and Original Sin over on the public as one “package deal.” No attacks by collectivists could do more to discredit capitalism than is done by this kind of attempt. Its result can only be to consign capitalism to the “lunatic fringe” of political thought and to remove it from the realm of serious, civilized discussion. [TON, Mar62]

But starting with Reagan’s candidacy, religion has moved to center stage.

In 1980, the Republican Party’s platform called for “a constitutional amendment to restore protection of the right to life for unborn children.” Similar anti-abortion wording has been there ever since—and every Republican presidential candidate from Reagan to Romney has supported it.

Fifty years ago, she supported Barry Goldwater, and advised infiltrating the Republican Party to “try and influence them in the right direction: toward capitalism and away from conservatism” and religion. [ARA, 53]

This is how she described James Buckley’s Conservative Party in 1976:

The Conservative Party is not an American political party, but a religious party—a phenomenon forbidden by the Constitution. You’re free to have any religion you wish; you’re forbidden to bring it into politics—that is, to establish it by force…. It’s a move back to the Dark Ages, where the Catholic Church wants us to be, politically. [ARA, 53]

A simple substitution (in bold) brings her words forward to 2012:

The Republican Party is no longer an American political party, but a religious party—a phenomenon forbidden by the Constitution. You’re free to have any religion you wish; you’re forbidden to bring it into politics—that is, to establish it by force…. It’s a move back to the Dark Ages, where the Catholic Church wants us to be, politically.

It’s easy to imagine Rand saying “So much for Republicans” to anyone who still believes they in any sense support capitalism and individual rights.

There are two, conflicting, answers to this question. To understand why, first consider Rand’s guidelines for evaluating political candidates, which she laid out in an article titled How to Judge a Political Candidate. [TON, Mar64]

freedom vs. statism—or individual rights vs. government controls, or capitalism vs. socialism—[which] is the basic issue of political philosophy…and, today, the only issue by which a candidate must be judged. [TON, Mar64]

Distilled from that article are the three primary criteria Rand applied to judging candidates:

1. Does this candidate support individual rights?

Eliminate those who don’t from the “maybe vote for” column.

2. Determine the candidates’ political philosophy and “major premise” (towards freedom or towards statism).

“One cannot expect,” she wrote, “nor is it necessary, to agree with a candidate’s total philosophy—only with his political philosophy (and only in terms of essentials).” [TON, Mar64]

For example, in 1964 she supported Barry Goldwater—even though she did not consider him a champion of laissez-faire capitalism.

3. Is the candidate consistent­: do his words and deeds send the same message, or does he “blow with the wind”?

Whether you vote for or against a candidate, you’re making a prediction about his future behavior.

Any candidate who says one thing but did or voted for the opposite cannot be trusted. Obama, whose campaign promises included close Guantanamo and end torture—who voted against the Patriot Act, and then extended its scope—is a perfect example. As is the senior George “read my lips” Bush.

As most politicians will say whatever it takes to get (re)elected, you can never take a candidate’s words at face value. Only a politician whose words are consistent with his past deeds can be reasonably expected to mean what he says and, in the future, actually do what he said he’d do.

As actions speak louder than words, Rand dismissed any politician whose words conflict with his deeds as a pragmatist or luster after power.

On this criterion alone, Obama, Romney andRyan all fail.

The final step in her process was to then decide whether to support a candidate (as she did Goldwater), vote against a candidate (choosing the “lesser of two evils”) or abstain.

The application of those three criteria to this year’s election can be summarized in a simple table:

Gary Johnson stands out as the only candidate whose political philosophy could gain Rand’s approval. Furthermore, the evidence of his consistency is not in mere votes but in his past deeds as Governor of New Mexico: On every measure he’s far superior to Goldwater.

But here’s the conundrum: Rand’s criteria point unequivocally to Gary Johnson. Were he the Republican candidate Rand would inevitably vote for him.

Except he’s running under the Libertarian Party’s banner.

Given that Rand viewed “so-called libertarians” as “my avowed enemies [who] attempt to cash in on my name and mislead my readers into the exact opposite of my views,” [LAR, 664] we can rule out the possibility she would vote for Gary Johnson.

Whether she registered a “protest vote” for Johnson or, as in 1980, abstained, she would surely reprise her 1976 words about Ronald Reagan:

Should those monsters, Romney and Ryan, succeed . . . I damn any of you who vote for them.

And you can bet she’d excommunicate any Objectivist who voiced support for the Republican ticket.