Because, writes the initiator of the group, Walter Block, of all the Republican candidates,

“he was the most libertarian on foreign policy. He was the least likely to get us into World War III. And, thanks to the tutelage I had received over the years from the likes of Murray Rothbard, Ralph Raico and Bob Higgs, I knew that imperialism, foreign aggression, were more of a threat to liberty than were violations of economic or personal liberty rights.” 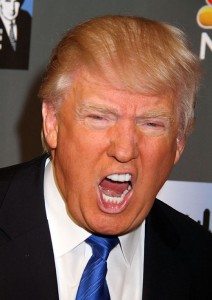 Doesn’t even look libertarian to me

No question, war is the health of the state, and paring back America’s overseas presence holds out the promise of chipping away at the military-industrial complex.

And, again no question: early in the Republican race Donald Trump made several statements along these lines—especially his heretical statement that George W. Bush’s invasion of Iraq was a mistake.

But . . . is there any reason we should believe a word he says?

Ever been fooled by a politician?

Think of all those people who voted for Barack Obama in 2008 because he promised to close Guantanamo, repeal the Patriot Act, and abandon torture and rendition.

Any libertarian who took him at his word was disappointed when, once in office, he did the opposite.

In 1980, Ronald (“government is the problem, not the solution”) Reagan appealed to many libertarians when he promised to cut the federal government down to size by, among other things, freezing federal hiring and abolishing the Departments of Education and Energy.

When his term ended in 1988, federal spending had actually grown from 27.9% to 28.7% of national income; the federal bureaucracy had increased by 230,000 (some hiring freeze!) to almost 3 million; the Departments of Education and Energy were still in business (and the Department of Education’s budget had doubled!); federal debt had tripled; and the US deficit had also tripled to its highest level since George Washington.

It may not be fair to give Reagan all the blame. But if he’d really meant what he said on the campaign trail, he would have put up far more resistance to the “tax and spend” Democrats (and Republicans!) in Congress.

Even Ayn Rand voted for Franklin Roosevelt in 1932 because he promised to abolish Prohibition and had the more libertarian platform.[1]

Roosevelt did abolish Prohibition—but in a complete about face, buried all the Democrats’ libertarianish promises by instituting the interventionist “New Deal.”

Every election proves, once again, the truth of the old joke:

How do you know when a politician is lying?
His lips are moving.

Let’s face it: everyone has been fooled by a politician. Most of us many more times than once.

Why should Donald Trump be an exception to this rule?

“Your cheque is in the mail.”
“I’m from the government and I’m here to help you.”
“Of course I’ll still love you in the morning.”

But should you believe any of them?

Not from the words alone. You can only believe such statements if you can judge whether the speaker means what he says and says what he means—and will actually do what he promises.

In other words, by judging a person’s character. Especially his or her integrity. Which can only be done by comparing current words with past actions.

In 1989, promoter Michael Cohl arranged the Rolling Stones’ “Steel Wheels tour” of the United States. The final event was to be shown worldwide via pay-per-view.

Cohl shopped the pay-per-view idea around Las Vegas, but got no interest. In the end, only Donald Trump would agree. When Cohl told the Stones, they responded:

“This is all great, but we’re not going to be affiliated with Donald Trump. At all. Screw you.” And I go, “I will control Donald Trump! Don’t you worry!”

So they went ahead. Their tour ended with three sold-out nights at Trump’s Atlantic City casino.

The Stones’ agreement with Trump included the proviso that Trump would not show up at the third, pay-per-view show.

On the night of that show, about thirty minutes before the Stones were to give a press conference, Cohl was called into the press room.

I run to the press room in the next building and what do you think is happening? There’s Donald Trump giving a press conference, in our room!

I go back to the dressing room. Five minutes later, he’s back up. They call me back over there. Holy shit. I call him out (again). Same thing happens. . . .

He’s up there again!

We go into the hallway. I said, “Donald. You lied. You broke your promise. One of two things is going to happen. You’re going to leave the building and, at 6:40, The Rolling Stones are going to speak on CBS News, or you’re not going to leave the building and I’m going to go on and do an interview to explain to the world why the pay-per-view was canceled. I know it’s your building and…” – and in my head I’m going, this is so crazy, right? I’m trying to throw Donald Trump out of his own building.”

But, anyway, the bottom line is I look at Donald and said, “You and Marla (Maples) have to go. You’re fired.” He looks at me and goes berserk.

“You don’t know anything! Your guys suck! I promote Mike Tyson! I promote heavyweight fights!” And I notice the three shtarkers (Yiddish for muscle man) he’s with, in trench coats, two of them are putting on gloves and the other one is putting on brass knuckles. I go on the walkie-talkie and I call for Jim Callahan, who was head of our security, and I go, “Jim, I think I’m in a bit of trouble.” And he says, “Just turn around.”

I turn around. [Callahan’s] got 40 of the crew with tire irons and hockey sticks and screwdrivers.
“And now, are you gonna go, Donald?”

And off he went.

From this incident we can conclude that:

As if that weren’t enough, he has no respect for property rights. He’s perfectly willing to enlist the government’s power of eminent domain to take other people’s property, at bargain-basement prices, for himself (see Donald Trump’s eminent domain love nearly cost a widow her house).

Are we seeing the real Donald Trump?

As distant observers it’s impossible to say. However, People magazine interviewed some of his friends, associates, and enemies to answer the question, Who is the Real Donald Trump? A couple of excerpts:

So the candidate-Trump we see on TV is an assumed persona, rather like the star of the TV show, The Apprentice.

And that persona changes depending on the audience.

Initially, Trump’s outrageous statements attracted enormous media attention. For “The Donald,” there’s no such thing as bad publicity. And if you have ever watched him being interviewed, you’ll realize he’s a master of media manipulation. Any question he doesn’t want to answer he simply ignores, talking over the interviewer or just saying whatever he wants to say. And getting away with it.

For Trump, his whole campaign was a no-lose proposition. Win or lose, he’d win. If he won the nomination, great. If he’d lost, he’d have dramatically increased the market value of the “Trump” brand name, and come away with an increased reputation as a political mover and shaker.

What’s more, by charging his campaign fund for the use of his plane, and other expenses, his supporters are effectively subsidizing him. He might even come out at the end of the day with a profit!

In his first such outreach, focusing on foreign policy, he said:

“I will never send our finest into battle unless necessary, and I mean absolutely necessary, and will only do so if we have a plan for victory with a capital V,” Trump emphasized.

We should remember that George W. Bush and Donald Rumsfeld had “a plan for victory with a capital V” when they invaded Iraq. Well, they thought they did.

They also thought it was “absolutely necessary.”

Trump opened his speech vowing to “shake the rust off America’s foreign policy” and said he would outline a vision for a U.S. foreign policy “that replaces randomness with purpose, ideology with strategy and chaos with peace.”

If Trump means what he says, Richard Nixon’s Secretary of State, Henry Kissinger, the master of realpolitik, would fit right in to a Trump administration.

He vowed to reverse China’s “assault on America’s jobs and wealth” and to use America’s “economic power” over China to bring Beijing into line.

The words of a Theodore Roosevelt-style interventionist, who’ll throw America’s weight around from the “bully pulpit.” Until, of course, it’s “absolutely necessary” to “send our finest into battle.”

None of these statements (or any others in this speech) are remotely libertarian.

Which Donald Trump should we believe?

The libertarianish one of last year? The one who “Libertarians for Trump” believe in?

The one who’s going to “bomb the shit out of ISIS” to make Iraq safe for American oil companies? Turning a big chunk of Iraq (and Syria, as well) into a wasteland and killing hundreds of thousands of perfectly innocent people in the process. (Yes that’s effectively what he said. Watch the video.)

How about none of the above?

We can cherry pick the statements we agree with and ignore everything else he says—the only way “Libertarians for Trump” can justify their existence.

Or we can realize the obvious: that Trump, like the consummate showman he is, “doesn’t give a shit” about what he says. Rather, he always tailors his words to suit his audience. Blowing with whichever wind commands the greatest popularity. Not giving a damn if he says today the opposite of what he said yesterday.

As Walter Block pointed out, he was not advocating supporting Trump because he’s at all libertarian, but because he was the most libertarian-sounding of all the Republican presidential candidates.

Once upon a time, that may have seemed true.

Trump is clearly a man of no fixed principle. Hence, his future actions are completely unpredictable.

When you support a political candidate you think X should be done, and you expect him to do it.

When, like Trump, a candidate lacks both principle and integrity, it’s impossible for anyone to predict what he will do. So there is no rational reason for anyone, libertarian or not, to support him.

As for Walter Block’s claim that Trump is the candidate “least likely to get us into World War III,” Block is talking about the person who refuses to rule out the use of nuclear weapons—even in Europe.

How can any libertarian vote for such a person?

“Libertarians for Donald Trump” is a total contradiction in terms. Its members exhibit, at best, incredible political naivety.