Does your vote ever count?

Even if your vote is the decisive one,
it still won’t count! 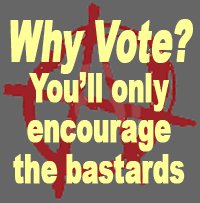 It’s election day. You head to the polls to vote for your preferred candidate, Ms. Always Right.

You certainly don’t want that bastard Mr. Gets It All Wrong to win.

When the votes are tallied your candidate gets 60,001 votes, decisively beating Mr. Gets It All Wrong with only 40,000 votes.

If you’d stayed at home the result would have been the same.

Your vote made the difference!

If you’d stayed at home it would have been a hung election.

Remember what happened in Florida in 2000? The Bush-Gore presidential election?

Not enough of a margin, according to Florida state law..

So there was a recount.

In the end, the recount was never completed. The election in Florida was decided by the courts.

With just a 1-vote difference, Mr. Gets It All Wrong is certain to demand a recount. And when there’s a recount, the result is always different.

Not surprising when you realize that the vote counting system, even when it’s 100% honest, is run with the same efficiency as the post office and other government departments.

If you’d stayed at home on election day, the result would have been 50,000 for each candidate.

So there’d have been a recount anyway.

Either way, your vote doesn’t count.

When your vote does count

Admittedly, there is a slim chance that your vote will count.

For example, in 2012 Economic Inquiry article, What is the Probability that Your Vote Will Make A Difference?, political scientist Andrew Gelman, statistician Nate Silver, and economist Aaron Edlin found that the chance of a randomly selected vote determining the outcome of a presidential election is about one in 60 million.

What if those 60 million-to-one odds pay off and your vote is the one that decides who is going to be the next president?

There’ll be a recount.

You can count on it.