The most important words you’ll ever write

What do you think are the most important words you’ll ever write?

Perhaps the opening sentence of your novel, the hook that grabs the reader by the short and curlies and never lets him go.

And we should always remember the concluding, page-turning paragraph of Chapter 1 (and, for that matter, every other chapter) that leaves the reader begging for more.

Or, it could be the covering letter to New York’s #1 agent that gets you that mouth-watering contract.

And how about the “blurb”—the marketing copy that excites book-buyers so much that they take it straight to the checkout counter.

Maybe it’s the climax: when you write or figure that out first, everything from page one of Chapter 1 to the dénouement can fall into a logical whole.

These are just a few of the many possible candidates for “the most important words you’ll ever write.” I’m sure you have your favorite.

But instead of trying to answer this question from our, the author’s point of view, let’s look at it from the reader’s perspective. (Should be easy enough to do: if we write, we read, right?)

The dénouement is, in many respects the toughest part of a fiction book to write and the most important to read. It must tie up all those loose ends while leaving us on a high. Too many dénouements leave us readers unsatisfied.

But that follows a book’s climax, which is also crucial, once we get to it.

Working backwards, through all those page-turning chapter-endings we reach sentence number one: the hook.

They must be the most important words in the book. After all, if we don’t hook the reader in the beginning, she’ll never get to the end.

But wait a minute. Let’s take a mental stroll through a bookshop (or scroll through Amazon). The first books we’ll probably see are ones like these…

…from authors who’ve established their name as a brand. Since we haven’t reached that exalted state as yet, our books will more likely look like this, with the author’s name in tinier (even teensy-weensy) type: 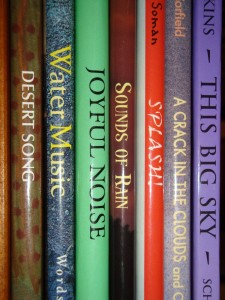 Even on Amazon’s thumbnail display, the title (when you can read it!) still does most of the work: 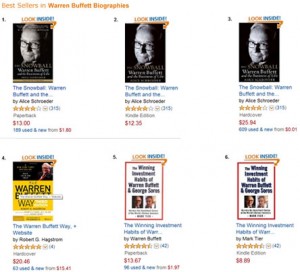 Have we seen that all-important hook yet?

Nope. And we won’t. Not until we pick up the book and open it.

So why will a potential reader who’s never heard of your book pull a copy off the shelf and “Look Inside”?

Which one do you think sold better?

If you guessed the one on the right, you’re dead wrong.

Did I say “two” books? They’re both the same book. The only difference is the title and, hence, the cover.

Becoming Rich, published 2005 in hardcover by St Martins Press, New York,had several tens of thousands of dollars spent on publicity—and died. A couple of years later, some 350 copies of the one-and-only print run of 5,000 were remaindered.

Around the same time, the Inverse Books (Hong Kong) edition of The Winning Investment Habits of Warren Buffett & George Soros published 2004, had completely sold out its first 5,000 hardcover print run and I’d gone back to the printer for a second print run of 5,000. Inverse Books, by the way, is my own imprint, and today I only have a handful of these hardcovers left.

To put this in perspective, my edition was only on sale in a few countries: Australia, New Zealand, Hong Kong, Singapore, Malaysia, and a few smaller Asian markets. St Martins Press, however, had the whole of the US, Canada, and the Philippines to itself. Plus most of the rest of the world (ex the British Commonwealth) on a non-exclusive basis.

The American paperback edition of “Becoming Rich”: now in its eighth printing with no publicity whatsoever

In sum, I sold twice as many copies in a market way less than one-tenth the size of St Martins’. Same book, different title. On a simple per capita projection, St Martins Press could have sold some 100,000-plus copies of Winning Investment Habits instead of 4,650 copies of Becoming Rich.

Excuse me a moment while I weep.

Luckily, when it came time for the paperback edition the publisher, in an admission of failure, suggested changing the title to How to Get Rich—a variation on a failed theme. So I convinced them to use the original.

The American paperback edition (cover at right: a much better design than the Inverse Books cover to the left of Becoming Rich, above) is now in its eighth printing, with no publicity whatsoever. 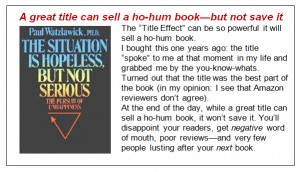 I should have known better. I cut my teeth in the world of direct mail marketing where the most important element of an ad is the headline, and headline tests are a matter of course.

This is the world where the addition of a single word—FREE—to a headline can increase sales by 35% or more; where headline #1 can outsell headline #2 ten or more times; where the first three rules of marketing are test, test, test.

To quote the famous adman, David Ogilvy (in Ogilvy on Advertising):

“On the average, five times as many people read the headline [of your ad] as read the body copy. When you have written your headline, you have spent eighty cents out of your dollar.” 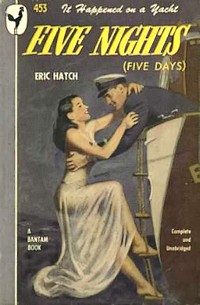 Or to put it another way, only 20% of those who read an ad’s headline are intrigued enough to read on.

The same principle applies to book titles—the more intriguing and compelling the title, the higher the “pick me up” ratio.

And the higher the “I’m hooked” ratio as well.

And consider these books:

Hardly surprising, with a title like that. But…all 120 pages are blank. The only thing that sells this book is the title.

Which is so good, there are two knock-offs: the two books on the right have the same title, and the same content (or lack thereof). You can even buy a Kindle edition (go figure!).

But hang on, you might be thinking. What about word of mouth, endorsements, reviews, promotion, and everything else that goes into marketing a book—aren’t some of them more important than the title?

Sure, some factors can have a much greater impact on your book’s sales. If John Grisham endorses your novel or Warren Buffett plugs your investment book, that rather than the title will probably get you on a bestseller list.

(But if it’s a lousy title, will a Grisham or a Buffett even pick it up in the first place? Why take the chance?)

F’rinstance, if your best mate tells you Becoming Rich is a fantastic book (which it is, of course, despite the title :-)) while another raves about The Winning Investment Habits of Warren Buffett & George Soros, which one are you more likely to buy? Or: if these two books land on a reviewer’s (or agent’s or publisher’s) desk, which one is she more likely to pick up?

The one with the title that sticks in your mind like glue.

And you have about two seconds for that glue to harden in a reader’s consciousness.

Book browsers aren’t the only people who succumb to the “title effect.” So do agents, editors, publishers, book reviewers, book sales people—and those all-important people who decide whether to carry your book or not: bookstore buyers. Not to mention those hardworking people in bookstores, who decide whether to display your book spine or cover out.

Both Barnes & Noble and Borders (before it went bust) stocked The Winning Investment Habits of Warren Buffett & George Soros. But only Barnes & Nobles stocked Becoming Rich.

Ultimately, it makes no difference whether you come across a book by accident while walking the shelves, browsing on Amazon, from a friend’s recommendation, a review you happened to read, or some other mention of it: a better title will multiply the effect of every other marketing effort.

Once your book’s “out there,” you’re stuck with the title. You can change the subtitle, rewrite the book and reload it on Amazon, change the cover design, the blurb, the flap jacket and back cover copy, and so on. But change the title and you stand to lose the traction you’ve already gained in the marketplace.

Sure, if your book has no traction, like Becoming Rich, by all means publish a new edition with a new title.

But better to get it right in the first place.

Especially when your book comes from a major publisher. You have one shot and one shot only of getting on the bestseller lists.

Becoming Rich never had a chance.

The Winning Investment Habits of Warren Buffett & George Soros could have made it—if the hardcover had come out with that title.

Which is why I’m convinced a book’s title are the most important words an author can ever write.

Can a Man Write a Convincing Rape Scene—from the Female Point of View?
August 22, 2014

A Rose by Any Other Name…? Shakespeare Got It Wrong
October 7, 2013
Have eBooks Changed Your Reading and Book-Buying Habits?
September 2, 2013