Can a Man Write a Convincing Rape Scene—from the Female Point of View?

The short answer is “Yes!”—says a female reader

I received this email from a lady friend who’s reading my novel, Trust Your Enemies:

From the beginning I was intrigued by one of major female characters—but confused at the same time. Until I came to the chapter where she was raped as a teenager.

I thought it was outstanding! I’m amazed at how well you are able to describe these feelings and reactions from a female perspective. I’m not saying I don’t think men understand the horror of such experience for a female. But to be able to portray it so vividly; I’m just amazed! You’ve obviously done a great deal of research. I think I didn’t take a single breath reading through that story!

Also, it really helps put her character in place. I told you from the beginning how intrigued I am with her but also confused at the same time. Now I understand that emotional conflict in her so much better.

This was one of the first scenes I wrote when I began writing Trust Your Enemies. It’s also the most rewritten scene in the novel. I completely lost track of the number of rewrites many moons ago. 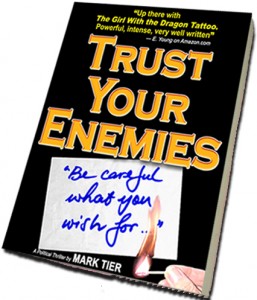 As best I can recall, the creation of that scene went through two distinct stages. The first part was to imagine how it feels to be a woman. It’s not as difficult as you might think.

There’s an NLP process called “Walking in the Shoes” which I’ve done many times. It’s straightforward: you follow someone and imitate their walk. If they take short steps, so do you. Sway their hips (or not) so do you. And so on: copy everything else they do—gestures, head movements, everything you can see.

After 15 to 20 minutes, you’ll begin to feel the way they do—at least, since you’re using your body to “imagine” how they feel, you’ll come to feel very different. The first time I did this I followed a very fat lady through a mall. After 5 or 10 minutes I felt this weight on my hips. Uncanny!

To write this scene, I had to feel what the character felt. I had to get into her shoes. So I imagined how it feels to be a women—to have breasts, a vagina instead of a penis, wider hips, long hair, makeup, and so on.

Stage two was imagine how it feels to be raped. The incredible violation of the self; the total lack of control; the incredible sense of betrayal, like the universe is against you—and much more.

One rather big problem remained. I’d written what I figured was a credible scene—but was it really? Not being a woman, how could I know for sure?

There was only one way to find out. A friend who had been raped was kind enough to read the scene. She gave me lots of feedback, and I kept rewriting it until she was satisfied.

It’s been a while, but I think I can say that I’d got the basics right, but there were lots and lots of details, including her actions and reactions in the following chapters, which my friend dramatically improved. Lots of “polish”—though that feels like a very inappropriate word given the subject.

Also, while I’m writing this, I’m finding I have to keep an emotional distance from the character, as if I’m a observing everything from far away, otherwise I’d get caught up in her feelings again.

I also learned something else that made this scene very effective from another friend who is a romance novel junkie. Apparently, in the novels she had read where a rape occurred, the rape itself was glossed over in a sentence or two. The focus was on the aftermath. In my scene, I went into every detail which, she said, made it far more effective.

Something I did not do was any research. I didn’t look anything up on the internet, talk to any rape victims (other than the friend I mentioned), read any other rape scenes, whether fact or fiction; in sum, everything came initially from my imagination unsullied by any reality check. In retrospect, it’s really quite amazing that to me that the scene came out as well as it did.

One other thing: when I reread Trust Your Enemies, this is one of the two scenes that make me cry. Every time.

A Rose by Any Other Name…? Shakespeare Got It Wrong
October 7, 2013