Railroad Tycoon is a wonderful computer game that should be issued with a warning: BEWARE: THIS GAME CAN BE ADDICTIVE.
I speak with considerable authority on the topic! 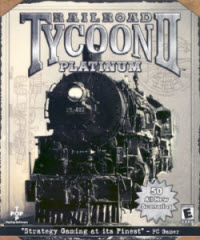 You’re the CEO of a railroad. Depending on which of the dozens of different scenarios you choose to play, you’ll have up to 31 computer-generated competitors. You can also play with real competitors over the internet. It’s your job to build your company into the richest, the biggest or the most profitable of all; carry the most freight; or become the richest player in the game (and, in some scenarios, all of these and more).

Built into the game are economic cycles that go from boom to depression and back (though not always predictably); the normal constraints that every manager must face between issuing equity, debt, where best to invest (build more track, buy more trains, invest in the industries you serve, take over a competitor), and so on. In your stock market account, you can buy shares in your company — or the competition’s. With or without margin.

It’s a great teaching tool for teenagers, who can learn about building a business, the economy and investing without knowing it while they have a lot of fun.

One of the most powerful lessons you can learn from Railroad Tycoon is about leverage. It’s frightening to see your entire wealth disappear in just minutes because you were over–leveraged and you face a margin call you can’t meet — while your company goes bankrupt. But it’s a lot cheaper to learn this lesson on a computer than with the help of your friendly stockbroker.

Author of the bestelling The Winning Investment Habits of Warren Buffett & George Soros, Mark Tier was the founder of the investment newsletter World Money Analyst, which he published until 1991, the author of Understanding Inflation and The Nature of Market Cycles. Since 1991, he's helped start five new (and highly successful) investment publications. When he adopted the the winning investment habits of Warren Buffett & George Soros himself, he sold all his business interests and now lives solely from the returns on his investments. His most recent books including Trust Your Enemies, a political thriller which is “Up there with The Girl With the Dragon Tattoo” and “Worthy of Ayn Rand” according to reviews on Amazon.com, and Ayn Rand's 5 Surprisingly Simple Rules for Judging Political Candidates.
Books on.. Risk & UncertaintyIntroduction to Visions of Liberty

Believe you have to “predict the market’s next move” to make money? You need to read this book!
March 19, 2012
Investment Books Worth Reading
April 21, 2005