Believe you have to “predict the market’s
next move” to make money?
You need to read this book!

Believing you have to be able to “predict the market” is one of what I call the Seven Deadly Investment Sins (see Chapter 2 of The Winning Investment Habits of Warren Buffett & George Soros for more). 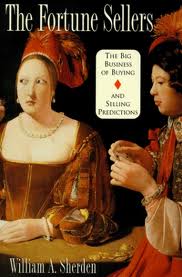 If you’re afflicted with this belief I implore you to read The Fortune Sellers: The Big Business of Buying and Selling Predictions by William A. Sherden. Sherden does more than just survey the whole gamut of fortune-sellers, from weather forecasters, to economists, to market gurus. He measures their predictions against what he calls the “naïve forecast.”

Through rigorous analysis, Sherden shows that only one class of forecasters beats the naïve forecast with any regularity: weather forecasters. But only for forecasts for up to four days in the future. And even then, by only a small margin.

So next time you’re tempted to listen to some guru’s market prediction, remember that you can beat any guru — on average — by simply “predicting”: the market will do tomorrow what it did today. Sherden proves this in The Fortune Sellers.

Author of the bestelling The Winning Investment Habits of Warren Buffett & George Soros, Mark Tier was the founder of the investment newsletter World Money Analyst, which he published until 1991, the author of Understanding Inflation and The Nature of Market Cycles. Since 1991, he's helped start five new (and highly successful) investment publications. When he adopted the the winning investment habits of Warren Buffett & George Soros himself, he sold all his business interests and now lives solely from the returns on his investments. His most recent books including Trust Your Enemies, a political thriller which is “Up there with The Girl With the Dragon Tattoo” and “Worthy of Ayn Rand” according to reviews on Amazon.com, and Ayn Rand's 5 Surprisingly Simple Rules for Judging Political Candidates.
Did God Evolve?God’s Problem