The Power of Mental Habits

continued/ It makes no difference whether you look for stock market bargains like Warren Buffett, scour the markets for undervalued takeover targets like Carl Icahn, trade currency futures like George Soros, use technical analysis, follow “candlestick” charts, buy real estate, buy on dips or buy on breakouts, use a computerized trading system — or just want to salt money away safely for a rainy day. Adopt these habits and your investment returns will soar.

Applying the right mental habits can make the difference between success and failure in anything you do. But the mental strategies of Master Investors are fairly complex. So let’s first look at a simpler example of mental habits.

Some people are poor spellers. They exasperate their teachers because nothing the teacher does makes any difference to their ability to spell.

So teachers assume the students aren’t too bright, even when they display better-than-average intelligence at other tasks — as many do.

The problem isn’t a lack of intelligence: it’s the mental strategies poor spellers use.

Good spellers call up the word they want to spell from memory and visualize it. They write the word down by “copying” it from memory. This happens so fast that good spellers are seldom aware of doing it. As with most people who are expert at something, they generally can’t explain what they do that makes their success possible…even inevitable.

The solution is to teach poor spellers to adopt the mental habits of good spellers. As soon as they learn to “look” for the word they want to spell instead of “hearing” it, their spelling problem disappears.

I was amazed the first time I showed a poor speller this strategy. The man, a brilliant writer, had gotten a string of Bs in school all with the comment: “You’d have gotten an A if only you’d learn how to spell!”

In less than five minutes, he was spelling words like “antidisestablishmentarian-ism,” “rhetoric” and “rhythm,” which had confounded him all his life. He already knew what they looked like; he just didn’t know that he had to look!*

Such is the power of mental habits.

The Structure of Mental Habits

A habit is a learned response that has become automatic through repetition. Once ingrained, the mental processes by which a habit operates are primarily subconscious.

This is clearly true of the good speller: he is completely unaware of how he spells a word correctly. He just “knows” that it’s right.

But doesn’t most of what the successful investor does take place at the conscious level? Aren’t reading annual reports, analyzing balance sheets, even detecting patterns in charts of stock or commodity prices conscious activities?

To an extent, yes. But consciousness is only the tip of the mental iceberg. Behind every conscious thought, decision or action is a complex array of subconscious mental processes — not to mention hidden beliefs and emotions that can sabotage even the most determined person.

For example, if someone’s been told “You can’t spell” over and over again, that belief can become part of his identity. He can understand the good speller’s strategy, and with an instructor’s guidance can even replicate the good speller’s results. But left to his own devices, he quickly reverts to his old mental pattern.

Only by changing the belief that “I am a poor speller” can he adopt the good speller’s mental habits.

Another, though usually minor, stumbling block is the lack of an associated skill. A tiny percentage of people simply can’t create an internal mental image: they have to be taught how to visualize before they can become good spellers.

Four elements are needed to sustain a mental habit:

Let’s apply this structure to analyze another process, one that’s simpler than the habits of highly successful investors but more complex than the “Spelling Strategy.”

Imagine we’re at a party and we see two men eyeing the same attractive woman. As we watch, we notice that the first man starts to walk towards her but then stops, turns, heads over to the bar, and spends the rest of the evening being an increasingly drunken wallflower. A few moments later, we see the second man walk over to the woman and begin talking with her.

A while later we become aware that the second man seems to be talking to just about everybody at the party. Eventually, he comes over to us and initiates a conversation. We conclude that he’s a really nice guy, but when we think about it later we realize he didn’t say very much at all: we did most of the talking.

We all know people like this, who can walk up to a total stranger and in a few minutes be chatting away like they’re lifelong friends. I call them “IceBreakers,” and behind their behavior is the mental habits they practice:

You can get a taste of how this works by trying it out for yourself. Just imagine (if you don’t already believe it) that you consider all people are interesting; and hear your own voice saying, “Isn’t he/she an interesting person.” Then look around, and if you’re alone imagine that you’re in the middle of a crowd. You should be able to feel the difference (if only for a moment).

The Wallflower, who ended up at the bar, had a very different mental strategy. After an initial flash of interest, he “ran a movie” in his head of all the times he had been hurt in a relationship, felt lousy — and went to have a beer to drown his sorrows. His emotional reaction was the expression of a subconscious, self-limiting belief that “I’m not good enough,” or “I always get hurt in relationships.”

Another pattern when meeting someone new is to continually wonder: “Is this person interesting (tome)?” This “Self-Centered” approach reflects a belief that only some people are interesting. And it has very different behavioral consequences.

Here’s a chart of these three different mental habits.

The Wallflower or the Self-Centered person can easily learn all the IceBreaker’s skills: how to establish rapport, how to “smile with your eyes,” how to be a good listener and so on. He can even create an internal voice saying, “Isn’t he/she an interesting person.” 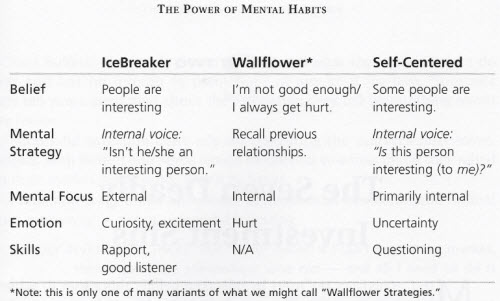 But what happens when the Wallflower actually tries to initiate a conversation with a complete stranger? His self-limiting beliefs override his conscious attempt to do something different — and nothing happens.

In the same way, an investor who subconsciously believes that “I don’t deserve to make money” or “I’m a loser” cannot succeed in the markets no matter how many skills he learns or how hard he tries.>

There are similar kinds of beliefs that lie behind many investors’ losses, beliefs that I call The Seven Deadly Investment Sins…

* The Spelling Strategy was developed by Robert Dilts, co-developer of the branch of applied psychology known as Neuro-Linguistic Programming continued…