The Power of Mental Habits

Warren Buffett and George Soros are the world’s most successful investors.

Buffett’s trademark is buying great businesses for considerably less than what he thinks they’re worth — and owning them “forever.” Soros is famous for making huge, leveraged trades in the currency and futures markets.

No two investors could seem more different. Their investment methods are as opposite as night and day. On the rare occasions when they bought the same investment, it was for very different reasons.

What could the world’s two most successful investors possibly have in common?

On the face of it, not much. But I suspected that if there is anything Buffett and Soros both do, it could be crucially important…perhaps even the secret behind their success. 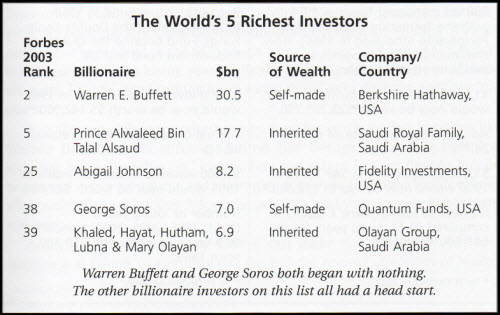 The more I looked, the more similarities I found. As I analyzed their thinking, how they come to their decisions, and even their beliefs, I found an amazing correspondence. For example:

As I analyzed their beliefs, behaviors, attitudes and decision-making strategies, I found 23 mental habits and strategies they both practice religiously. And every one of them is something you can learn. 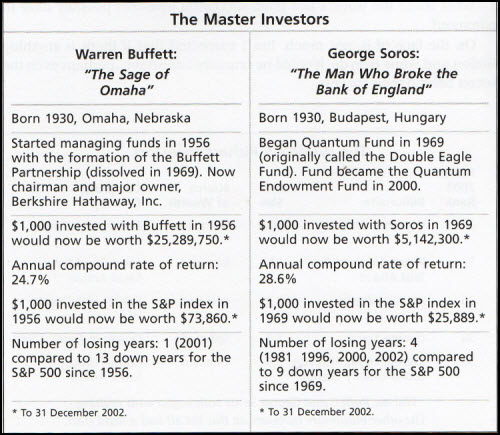 My next step was to “test” these habits against the behavior of other successful investors and commodity traders. The match was perfect.

The feared company raider Carl Icahn — whose net worth leapt an amazing 52% in 2003 to rocket him past George Soros on the Forbes list of the world’s richest people; Peter Lynch, who produced an annual return of 29% during the years he ran the Fidelity Magellan Fund; legendary investors such as Bernard Baruch, Sir John Templeton and Philip Fisher; and every one of dozens of other highly successful investors (and commodity traders) I’ve studied and worked with, all practice exactly the same mental habits as Buffett and Soros, without exception.

Cultural background makes no difference. A personally dramatic moment came when I interviewed a Japanese investor living in Hong Kong who trades futures in Singapore, Tokyo and Chicago using Japanese “candlestick” charts. As the conversation proceeded, I checked off one habit after another from my list until I had 22 ticks.

And then he asked whether I thought he was liable for any tax on his profits from trading. That completed the list. (Thanks to Hong Kong’s liberal tax regime, it was easy for him to legally do what he wanted: trade tax-free.)

The final test was whether these habits are “portable.” Can they be taught? And if you learnt them, would your investment results change for the better?

When I changed my own behavior by adopting these Winning Investment Habits, my investment results improved dramatically. Since 1998 my personal stock market investments have risen an average of 24.4% per year — compared to the S&P which went up only 2.3% per year (from 1 January 1998 to 31 December 2003). What’s more I haven’t had a losing year, while the S&P was down three out of those six years. I made more money more easily than I ever thought possible. You can too continued…