What caused Allende’s downfall?
The major factor, I argued in this 1973 article, was the revolt of the middle class. 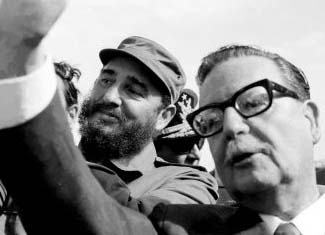 Allende (right) with his mate, Fidel

There are two ways of changing the world: by imposing your will on others, or by persuading them that your course of action is the correct one. Salvador Allende Gossens firmly rejected the former, but he did not take up the latter.

When he became president of Chile, Allende had the support of most of the people — not their personal support, but their support in his right to be president. Chileans had faith in their democratic system, proof of which is provided by the very fact of Allende’s election.

In an act of faith in the democratic system, congress acted out of tradition and chose Allende.

Once in power, though, Allende seemed to forget that he was a minority president, and moved too fast for the majority of Chileans. In ruling as though he had a mandate for his policies, he ended up polarising Chilean opinion.

If his policies had worked, the results may have been different. But they didn’t — they were disastrous for the Chilean economy. Most significantly, however, is that the major factors were internal rather than external.

There are two important factors which were external in nature and which had negative effects on Chile’s economy. The price of copper, Chile’s main export, fell drastically while Allende was in power; and the US made it difficult (if not impossible) for Chile to gain credit internationally. Foreign investment capital also dried up.

Chile’s economy is dependent on the rest of the world: it exports copper (and little else) and imports food, equipment and spare parts. As a result of the nationalisation of the copper mines, copper production fell; as a result of agrarian reforms, domestic food production fell. Thus Chile had less to sell on the world market — at lower prices — and had to buy more. This foreign exchange squeeze also made importation of spare parts difficult, one of the complaints of the truckers, resulting in a black market for US dollars.

Although Chile’s economy is dependent on the rest of the world, the rest of the world cannot be blamed for Chile’s economic plight. If copper and food production had remained constant, Chile could have survived, fairly easily, the withdrawal of international credit and capital, despite the falling copper prices. It is certainly true that the American companies had been particularly lax in training Chilean nationals to managerial positions in the mines. The result was that the nationalisation of the mines left the Chileans incapable of running them efficiently: politicisation of the mines put non-economic factors to the fore.

Nationalisation per se is no panacea. With a slower course of action, it is conceivable that Allende could have persuaded the Americans to phase themselves out. After all, in the Middle East, the Americans don’t seem to mind nationalisation too much.

But it is unlikely that Allende could have moved more slowly — even had he wanted to. As the leader of a coalition, rather than a unified party, he was at the mercy of extremist factions. For those of his supporters who were on his left, Allende was moving too slowly as it was. Many of his supporters wanted to implement their Marxist program without regard for the democratic process. To them, the opposition which Allende’s policies brought proved that Allende had to disregard opposition and ride roughshod over his opponents.

Allende was between two stools: committed to the democratic process, he wanted to convince the populace that his course was the right one, but the very same democratic process meant that he leant on the support given him by the extremist factions of his coalition.

Many of Allende’s supporters felt that Allende’s presidency gave them a mandate to violence. Since Allende required their support, he was unable to restrain them. He was the man in the middle, in a vicious circle. On the one hand, congress, controlled by his opponents, blocked his path; on the other, his increasing dependence on the more radical members of his coalition increasingly aggravated his opponents.

As the process continued, and his policies began to bite, Chile became polarised more and more into pro and anti Allende camps, and the middle class began to protest.

Allende was not brought down by the rich. The rich man can survive any Marxist revolution — barring outright expropriation. As long as any vestige of political freedom remains, they can emigrate to Switzerland or wherever and live on their Swiss bank accounts. Not so the middle class.

It was the middle class which bore the brunt of Allende’s policies. Rising food prices brought housewives out on the streets in their thousands. They were not the poor housewives, who were probably eating better than they had before. The poor had received higher wages, and special assistance — they had received the benefits of Allende’s reign. These are, no doubt, the reasons behind Allende’s increased popularity at the congressional elections — from 36 percent to 44 percent.

The middle class was squeezed by inflation, by rising prices, by the shortages of meat and other foodstuffs. (The rich, of course, weren’t too happy — but then, they were rich.)

In a reversal of the normal situation, the middle class, led by the truckers, went on strike. The main grievance of the truckers was the increase in state controls, together with the threat of government competition and the increasing difficulties in getting spare parts.

When the truckers went on strike, Allende made his most serious mistake. He announced a state of emergency, which was followed by wholesale arrests. Protesting housewives were dispersed with tear gas, while a massive demonstration of his supporters gained his sanction — and gave him a psychological lift.

His actions further polarised Chile. The professional workers went on strike. He could still have placated them, compromised. But he was in the middle. In an invidious situation, and any move towards a compromise could have lost some support. Or, worse still, have turned some of the extremists against him.

In a democracy, when most of the people oppose you most of the time, it is very difficult to rule. This was Allende’s contradiction: in any society, a majority of the population will oppose significant change; in a democracy, people will make their opinions known and act upon them if sufficiently provoked. But when a democracy is polarised, as was Chile, it is only a small step to civil war.

Even so, it is conceivable that democracy could have reasserted itself, but the result of the coup is that democracy in Chile is dead, the saddest thing of all. There have been some sickening attempts (by The Canberra Times and News-Weekly in particular) to justify the coup on the basis that 63.7 percent of the people didn’t vote for Allende. Allende was constitutionally elected, and the only way he could be removed legally was by constitutional means.

Allende’s powers of persuasion were legendary: the coup leaders arranged that Allende’s calls would be routed to a central office to ensure that he could woo none of the coup leaders away from their cause. That was how afraid they were of his voice! With this power, set on a slightly more conciliatory course, it is possible that he could have quietened his extremist supporters, and won some of his opponents. But he was doomed to failure as long as he did not realise that, in a democracy, a ballot box revolution is not possible wholesale.